Office 2010 stubbornly insists that the language setting for the thesaurus and the spellchecker follows the currently active input language for Windows 7. This can be a little bothersome, especially when editing documents in a foreign language with a keyboard layout other than the one commonly used to edit that language. To reproduce the problem on your own computer try this:

A working thesaurus is well worth the trouble. This is a relatively straight-forward thing to accomplish, although it involves several steps to complete.

This article will use British English with Norwegian keyboard layout as an example setup. This setup will be useful for employees and students at the University of Bergen taking courses in English, as well as several others. The process will be similar for other languages, such as German, French, Chinese, Japanese and Arabic. Note that you have to add your physical keyboard layout to each and all of the input languages you use. Thus, if you use multiple languages in your textual work, say English, German and Norwegian, you have to enable Norwegian keyboard layout for each of these languages.

Following the example setup, the first step is to add British English to the list of 'Input Languages' in Windows 7. This is accomplished as follows:

These settings will be enabled for subsequently started programs and saved in your Windows profile for later login sessions. For any running programs you will have to select the desired input method with the language bar.

Selecting British English for standard input language might be a bit drastic. Remember that this will effectively change the default proofing language for all Microsoft Office programs, such as Microsoft Outlook and Microsoft Powerpoint. Other programs might be affected as well. If you want to select input languages for each program separately, this has to be done each time you start the program, by means of the language bar. Se below for instructions for doing so.

To add British English to the list of enabled proofing languages in Microsoft Office do the following: 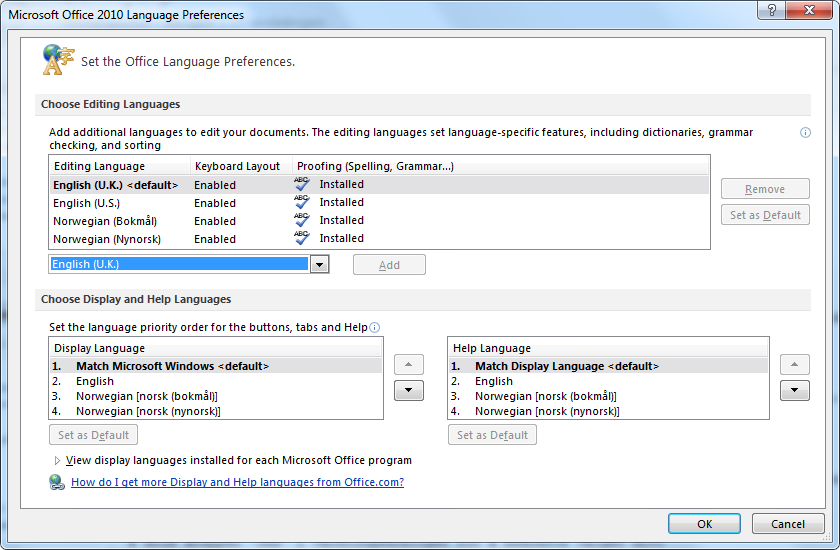 Microsoft Word 2010 is normally configured to try and guess which proofing language to use, based on heuristics on the text in the paragraph or sentence. This works notoriously bad. I prefer to turn this "feature" off. I find it much more reliable to select proofing languages using the language bar. Se below for instructions for doing so.

To disable the guesswork involved in autodetecting the proofing language do the following:

The language bar is normally visible in the system tray. It appears as a small button with a two-letter language code.

This, by the way, is the way to select keyboard layout while using complex languages, such as Chinese, Japanese, and Arabic. Such languages have different keyboard languages for different purposes. Such languages might also need extra language packages, as available from Windows Update, installed in order to work properly. At the University of Bergen you will need help from the IT Department for Installing extra language packages.

Using the language bar you can select the input method and keyboard layout on a per-program basis. Microsoft Office will select proofing language accordingly if you have followed the instructions above.

You can optionally set up hot keys for switching input languages. This is can be achieved using 'Settings => Advanced Keys Settings' on the language bar. 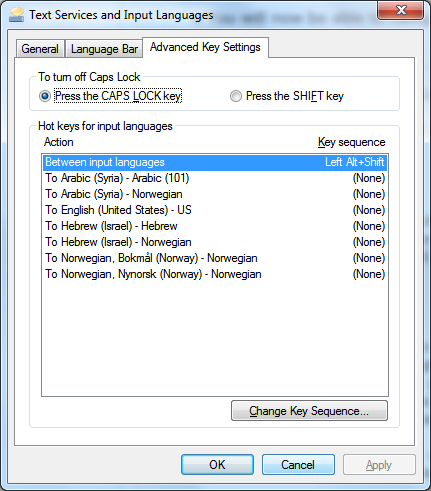 To verify that the thesaurus in Microsoft Word works as intended:

You will now be able to navigate back and forth in the tree of linked words in the thesaurus.

To verify that the spell checker works as intended:

The text should be proofread properly.